Standing at the center of the marker shown on the map below, a GPS unit set to display position in UTM/UPS format, would report a location of:

Let's look at where the various parts of the UTM position come from on the map. 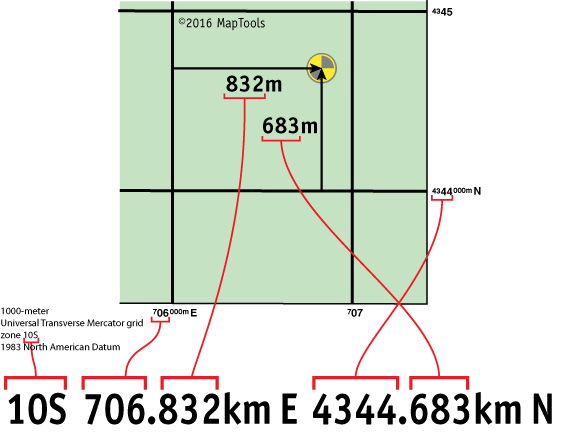 Look along the bottom edge of the map at the labels for the vertical grid lines.

, is an abbreviation for,

The 10S is the Grid Zone Designation you are in. The Grid Zone is necessary to make the coordinates unique over the entire globe.

The top set of numbers, 706832, represent a measurement of East-West position, within the Grid Zone, in meters. It's called an Easting. Using a map with a 1000m grid, the first digits are come from the label for the grid line to the west of the position. The last 3 digits are the distance in meters measured from the western grid line.

The bottom set of numbers, 4344683, represent a measurement of North-South position, within the Grid Zone, in meters. It's called a Northing. Using a map with a 1000m grid, the first digits are come from the label for the grid line to the south of the position. The last 3 digits are the distance in meters measured from the southern grid line. 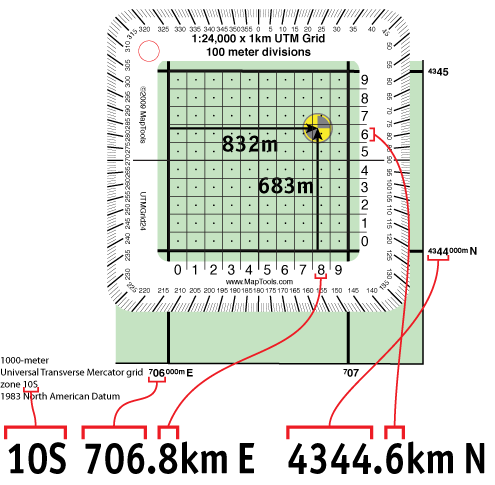 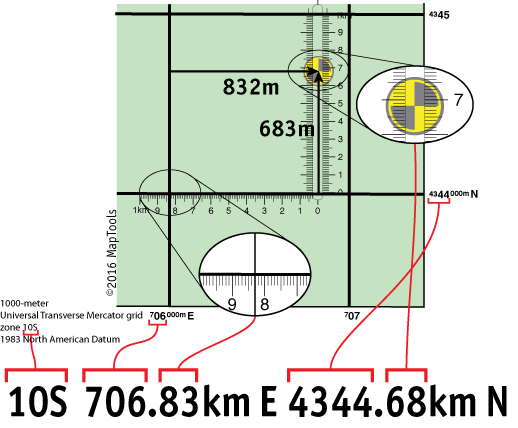 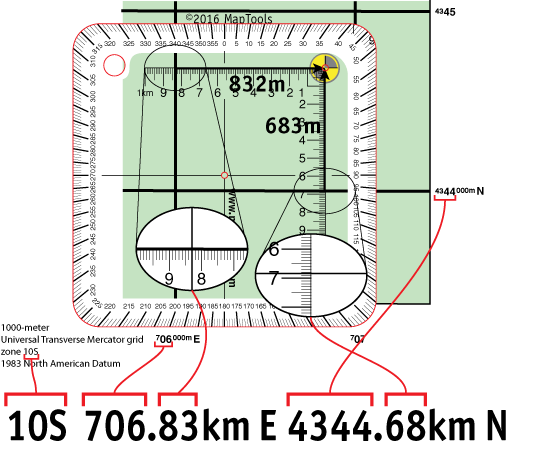 Leading zeros on the Easting and Northing

It's very common for a GPS receiver to display a leading zero on the Easting measurement, as a place holder for the millions meter digit. In our example the GPS shows an easting of 0706832. We typically drop the leading zero when we write the number. If you made a purchase for $706.83, you probably wouldn't write that as $0706.32. But if you were filling out a form with a box for each digit, you would want to get the digits in the right place.

Your GPS fills the "empty boxes" on the left with zeros. You should too, when you are entering a coordinate into your GPS.

For improved clarity, write the measurement units with the Easting and Northing

There are several documented cases where a string of digits was passed, usually by voice, to someone else who misinterpreted the coordinate format. In one case this led to the rescue helicopter being sent 30 miles away from the actual incident.

Map Datums and why they are so important