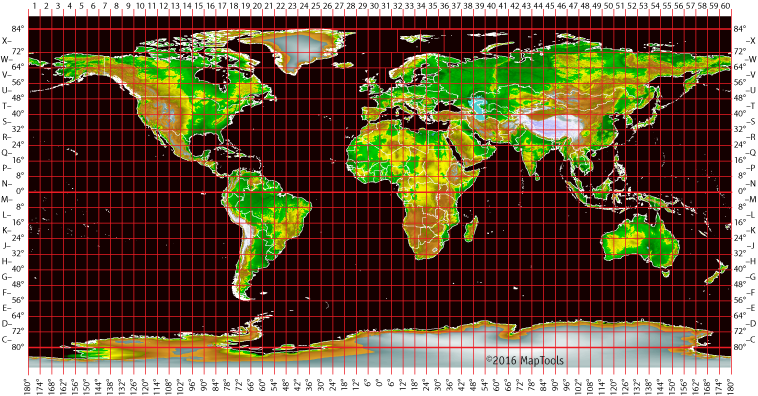 The UTM coordinate system divides the earth into 60 zones each 6 degrees of longitude wide. These zones define the reference point for UTM grid coordinates within the zone. UTM zones extend from a latitude of 80° S to 84° N. In the polar regions the Universal Polar Stereographic (UPS) grid system is used. Note that there are a few exceptions to zone width in Northern Europe to keep small countries in a single zone.

Each zone is divided into horizontal bands spanning 8 degrees of latitude. These bands are lettered, south to north, beginning at 80° S with the letter C and ending with the letter X at 84° N. The letters I and O are skipped to avoid confusion with the numbers one and zero. The band lettered X spans 12° of latitude.

Eastings and Northings within a zone 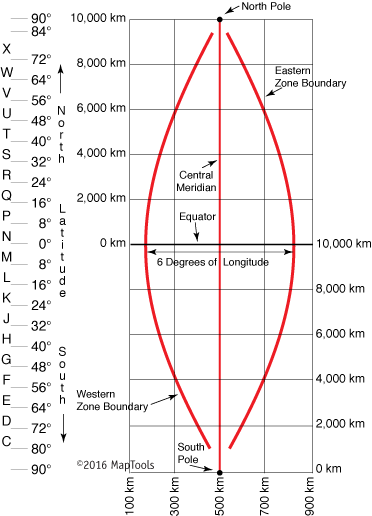 A single grid zone measures about 20,000km tall and only about 700km wide. So the above diagram has been compressed in the vertical axis by about 15X. The eastern and western zone boundaries are truly much straighter.

A square grid is superimposed on each zone. It's aligned so that vertical grid lines are parallel to the center of the zone, called the central meridian.

UTM easting coordinates are referenced to the center line of the zone known as the central meridian. The central meridian is assigned an easting value of 500,000 meters East. Since this 500,000m value is arbitrarily assigned, eastings are sometimes referred to as "false eastings"

An easting of zero will never occur, since a 6° wide zone is never more than 674,000 meters wide.

Minimum and maximum easting values are:

(Exceptions to this will be found in the unusual zones in northern Europe.)

If this is your first exposure to the UTM coordinate system you may find the layout of zones to be confusing. In most land navigation situations the area of interest is much smaller than a zone. The notion of a zone falls away and we are left with a simple rectangular coordinate system to use with our large scale maps.